Co-creator of Polish Power Grid: neither Poland nor the Baltic States need Ostrołęka C. It can only harm them.

The Minister of Energy admitted that the construction of Ostrołęka C was not in Poland's interest, but he claimed that it is indispensable for EU synchronization with the Baltic states. Former President of the Polish Power Grid, Prof. Dr. Jan Popczyk, refutes this claim.

Professor Jan Popczyk, co-author of Poland’s synchronization with the Western European system and an expert on energy security and energy transformation stresses that the Minister of Energy's claim that the 1000 MW of Ostrołęka C unit is necessary to fulfill Polish obligations resulting from the need to synchronize the systems of the Baltic states with the European power system UCTE is extremely unfortunate for the Minister himself. He further explains Minister’s error:

First of all, it is not about the synchronization of systems in the AC system, but about the connection with the already existing Polish-Lithuanian transmission system LitPol Link connecting the systems using the back-to-back coupling and with the use of a transmission system with a submarine direct current cable, which may be built by 2025. Let us remind you that synchronization in the AC system was carried out in the case of the systems of Poland, the Czech Republic, Slovakia and Hungary in 1995. It required more than 4 years of comprehensive systemic operations, which had to be carried out practically on their own by the countries applying for synchronisation.

Secondly, the system with the submarine cable will cost about EUR 1.4 billion. The Baltic States expect the EU funding of up to 75% of the project’s costs. In case of transmission infrastructure, funding may come from the EU cohesion fund. Under no circumstances, however, can generation sources be supported after interconnection in a single market, because this would violate competition rules.

Thirdly, and what's happening here is absurd. The Ostrołęka coal-fired power unit, built by the American consortium GE Power, with the money of two Polish energy groups staggering on their feet and demanding horrendous increases in electricity prices, burning imported coal (because there is not and will not be enough Polish coal for Ostrołęka C) has no chance of winning the competition in Poland, let alone on the European market coupling.

Finally, even if there were any agreements between the EU, the Baltic States and Poland concerning the exclusion of Polish generation sources, which are yet to be built, from competition on the single European market - in the name of a strange 'solidarity' in this case - they could not apply to coal-fired power stations. Such arrangements would completely ruin the credibility of the EU.

During the COP24 climate summit in Katowice, Minister of Energy Krzysztof Tchórzewski confirmed that construction of the Ostrołęka C coal-fired power plant is not in Poland's interest. He justified its construction with the alleged need for solidarity with the European Union and the Baltic States and with "meeting the deadlines". The statement that Ostrołęka C is an important element conditioning the completion of the synchronization of the power systems of the Baltic States with Continental Europe was also included in the document "PEP 2040 in questions and answers". To date, however, the Ministry of Energy has not presented any strategic document that would confirm this thesis - the documents of the European Commission, Polish Power Grids and Lithuanian operator LitGrid do not mention it.

Ostrołęka C turned out to be deeply unprofitable and harmful to people and the environment, so Minister Tchórzewski invented another, completely unbelievable argument to justify its construction. Meanwhile, the bills for electricity produced from coal are growing and investments in clean energy are being hindered. How much longer will we pay for the farce the project to build this power plant is? - comments Diana Maciąga, the climate coordinator from the Pracownia dla Wszystkich Istot (Workshop for All Beings) Association.

In the years 1990-1995, Prof. Dr. Jan Popczyk co-created the Polish Power Grid (Polskie Sieci Elektroenergetyczne) and served as its President. At that time, he implemented the power engineering reform and the concept of disconnecting the Polish power system from the USSR and Central European countries (POKÓJ System) and interconnection with the Western European system. In the years 1998-2000, he was an advisor to the Minister of Finance for the entire fuel and energy complex, in particular in the area of power engineering, gas and heating. In 2003-2004, he cooperated with the Minister of Economy in order to formulate the Polish doctrine of energy security. Currently, he is conducting research on the conditions for the transition of the power industry to a new development stage, which he calls SYNERGETICS. He is also the initiator and founder of the Centre for Prosumer Energy of the Silesian University of Technology; the author of the book "Distributed Energy. From the domination of energy in the economy to sustainable development, from fossil fuels to energy efficiency and renewable energy" (2011); co-founder and former President of the Association of Independent Generators of Combined Energy (2003 - 2012) and President of the 3×20 Cluster Association (since 2011), in 2018 he led to the establishment of the New Concepts and Energy Technologies Section at the Gliwice Branch of SEP.

Professor Popczyk is also the co-author of the report "Analysis of risks and lost opportunities related to the construction of Ostrołęka C unit (1000 MW class)". The scientist draws attention to the negative impacts of this investment on the development of the Ostrołęka region and to the fact that investments in clean energy are a real alternative to the coal project, which would bring much less jobs.

Comparing the employment in Investment1 [Ostrołęka C power plant], calculated together with coal mining, and Investment2 [a set of dispersed investments in the emerging mono markets of RES electricity], the employment in the RES-related sector is over 45% higher. [...] However, if coal is imported (there is a very high risk that it will be so), employees of Ostrołęka C Power Plant will remain (250 people), and the remaining employment will move outside Poland. In extreme cases, employment in the new energy sector will be 1200% higher, the report reads. 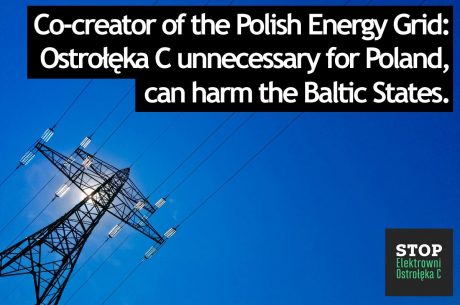